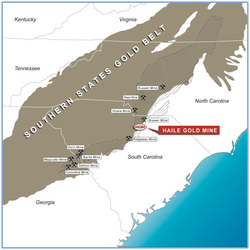 People laughed  when geologists started poking holes in the pine forest at the edges of the South Carolina Piedmont looking for gold.

But they stopped laughing when mining companies started buying up huge chunks of land, when a mining giant began gouging out cavernous pits for one of the nation's largest gold-processing operations,
and when South Carolina suddenly became the only non-Western state among the 10 largest gold producers in the world.

Now the question is how far South Carolina's gold rush will go, and whether the state fully understands the aspects of a mining revolution that allowed the United States to increase gold production more than ninefold in the 1980's.
HISTORY
Gold mines in the Carolina Slate Belt - USGS.South Carolina had a number of lode gold mines along the Carolina Slate Belt.
About 2 million ounces of gold have been produced in South Carolina since 1827. South Carolina was the scene of a modern-day gold rush between 1985 and 1996, with four major open-pit mines in production, plus widespread exploration.
At the peak of activity, the Ridgeway (Fairfield County), Barite Hill (McCormick County), Brewer (Chesterfield County), and Haile (Lancaster County) were the principal mines in production.

The former Barite Hill mine in McCormick  county was a cyanide heapleaching
operation that produced roughly 58,996
ounces of gold and 109,000 ounces of silver between
1990 and 1994. Gold and silver mineralization
was deposited in massive sulfides (pyrite) from
a series of epithermal events. The mine was operated
by Nevada Goldfields Inc

The Haile deposit was discovered in Lancaster County in 1827, and at least 275 thousand ounces of gold were extracted intermittently between then and 1942, when the gold mine was ordered closed as nonessential to the war effort. Beginning in 1951
, the deposit was mined for associated sericite, which was used as a white filler. Gold is associated with silicic, kaolinitic, and pyritic alteration of greenschist-grade felsic metavolcanics.The mine was reopened as an open pit in the 1980s, and operated until 1992.
Kinross Gold Corporation's reclamation of the Haile site was nominated for a US Bureau of Land Management "Hardrock Mineral Environmental Award.  "The famed Haile, discovered in 1827, produced over 45,000 ounces of gold, plus considerable silver, between 1988 and 1990.
The Haile Mine has produced over 350,000 ounces of gold since 1827.
Haile is now owned by Remarco.  Remarco has made new finds on the site that could yield huge amounts of gold.

The Brewer mine operated from 1828 to 1995, and is now a federal Superfund site.

Abbeville county lies in the gold-bearing belt extending from Dahlonega, Georgia, through the states of South Carolina, North Carolina, Virginia, and into Maryland.
One of the richest of the "diggings" was the Dorn Gold Mine in the 1800's  in Abbeville County.
It was what was known as a "pocket mice," and after yielding $3,000,000 was abandoned, the pocket having been thoroughly picked, and for many years the mine has not been operated.
While the mineral resources of the county are practically a virgin field, sufficient prospecting has been done to indicate vast potential wealth.
Awaiting exploitation by even limited capital. Only a fraction of the gold present in the Piedmont region has been mined.

The Candy Branch Mine located where Abbeville, McCormick and Greenwood counties meet is the latest in another large deposit of gold. The discovery was made in the early 1990's by T.L.G. a professional prospector and treasure hunter. A placer deposit with an estimate of 12000 ounces exist. Since then
gold bearing veins have been discorved on the site with great potential. The mine lies in the gold-bearing belt on a large tract of land yet to be explored. According to the history of the area and the large amount of gold found on the surface.
The Candy Branch Mine owned and operated by the CONFEDERATE MINING Co. has the potential to become one of the states largest producers of gold. 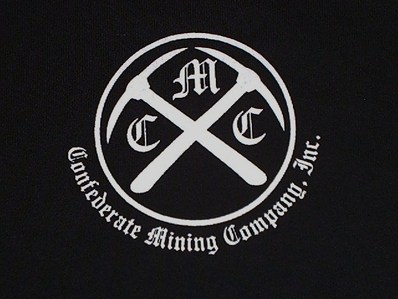